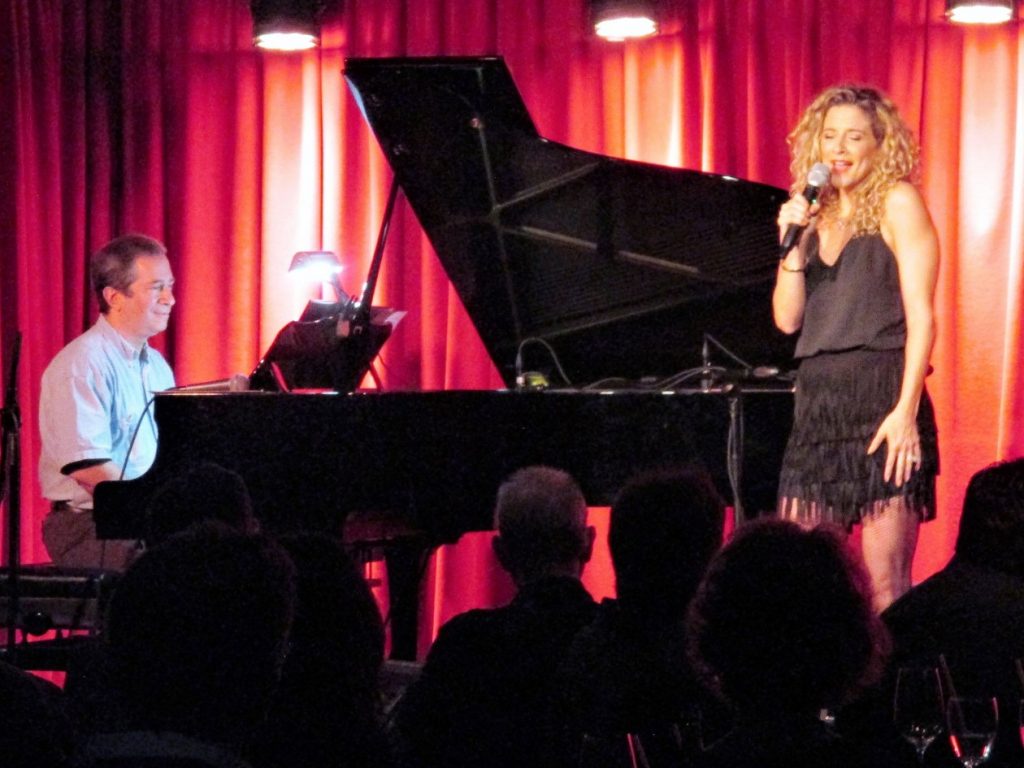 A gem of a show that featured a cluster of comical jewels from Broadway, along with fun-loving theater and cabaret performers took the stage at the E Spot Lounge, Upstairs at Vitello’s in Studio City, CA. Produced by Dianne Fraser and Amy Brothman, “Michael Lavine & Friends” (on April 18) was a night of songs from musicals that put the emphasis on comedy.

“This is a no ballad zone. We’re featuring songs that have a sense of fun,” announced the show’s host Michael Lavine, an acclaimed Broadway vocal coach, pianist, performer, and sheet music guru who knows how to pair a witty ditty with the right singer to emphasize the zingers. And he launched the night with a naughty song that sounded less bawdy sung in Spanish—“Como Te Gusta Mi Pinga?” Ay, caramba! He also did the seductive “Jackie” from Jacques Brel is Alive and Well and Living in Paris.

Among his many talents, Lavine is a great storyteller, and he regaled Vitello’s musical-loving audience with the stories behind the rare Broadway tunes that were sung. The NYC fellow was like an encyclopedia revealing fascinating details about the songs as well as the impressive credits of the singers in the spotlight.

Taking centerstage with Lavine as their accompanist were David Zack doing a snappy duet with himself on “Bargaining” from Do I Hear A Waltz. A funny and animated Shelly Goldstein did a wild rapid-fire “Not Getting Married Today” from Company. Ultra-amusing as an Edith Piaf-styled gypsy Fay DeWitt sang “French With Tears” from Alive and Kicking. An original A Chorus Line alumni, snappy Sammy Williams was pure class as he offered a song that was written especially for him, “When 50 Wore A Tux” from Too Old for the Chorus. Another snazzy fellow Greg MacKellan did the vintage song that still rings true, “I Don’t Want to Be President” from 1934’s Calling All Stars. And Autumn Reeser was so sassy with “He Takes Me Off His Income Tax” (Melania Trump-esque) from New Faces of ’52.

A real show-stopper was the Porgy and Bess Gershwin medley from Ilene Graff, providing a powerful moment in the show, with Graff’s husband, composer Ben Lanzarone providing the inspiring arrangement and accompaniment. Also getting serious was Joanne O’Brien beautifully channeling her purest Doris Day for “Love Me or Leave Me.” And sexier than Liza was Alexis Carra strutting to “Mein Herr” from Cabaret.

More highlights came from the cleverest songwriter since Cole Porter, the wonderful Carol Weiss who did “The Story of Eggbert,” a participatory kids song that had the audience cracking up. Young, pretty and talented Juliana Hansen sang “I wanna be rich, famous and powerful” with gusto—lyrics from “My Simple Christmas Wish.” And singing “The Hills Are Alive,” ingénues Oliviana Halus-Griep and Emma Ragen were hilarious as rivals for the lead in a high school production of The Sound of Music.

All of this great talent came together thanks to Dianne Fraser and Amy Brothman, who not only produced the show but also teamed up for the absolutely delightful “I Don’t Know His Name” from She Loves Me. In the past, shows from the Fraser Entertainment Group have showcased great Broadway and cabaret talent and putting the spotlight on “Michael Lavine & Friends” for almost two hours was one of the most memorable and fun musical nights ever at Vitello’s E Spot Lounge. All in the grateful audience hope for a return visit.

Vitello’s was once a hangout for Sinatra and his Rat Pack, enjoying great food in a cabaret atmosphere, and it continues the swinging tradition by featuring a variety of great performers and musicians—cool jazz, Latin music, established singers, and emerging talent. Check out the monthly schedule at www.vitellosrestaurant.com/e-spot-lounge.