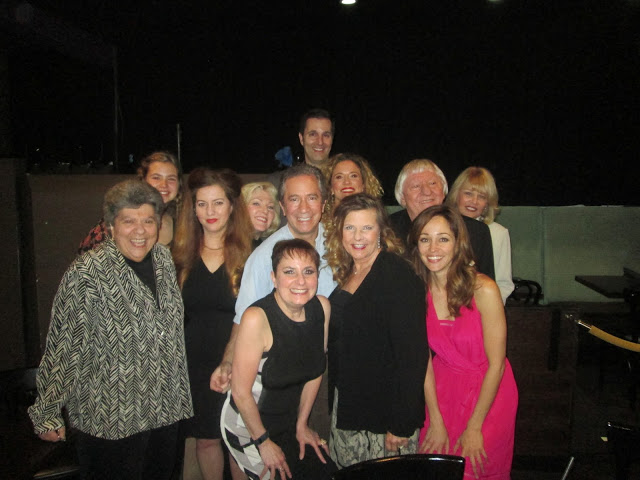 At the E Spot Lounge, upstairs at Vitello’s, Studio City on Tuesday April 18, Amy Brothman and DiAnne Fraser produced a delightfully eclectic evening of song and storytelling under the supervision of musical director Michael Lavine, titled simply Michael Lavine & Friends. What a treat! Lavine, who lives most of the year in New York, is a director, performer, coach and musical genius par excellence. He has produced a CD also entitled Michale Lavine & Friends, which, like the show, offers rarely heard songs from less familiar Broadway shows. Some of these are musical gems, and for one reason or another, never hit the charts.

At the top Lavine accompanied himself at the piano on a rousing “Como Te Gusta Mi Pinga?” a rather raunchy tune that would be taboo if sung in English, but in Spanish it rings with an infectiously delightful flair. Centerstage he explained that he has done this kind of evening in New York. The goal? To present a fun, funny, upbeat evening of songs. Well, judging from “Como Te Gusta Mi Pinga?” to Carol Weiss’s adorable kiddie musical The Story of Eggbert to Evelyn Halus‘s original family tune “The Hills Are Alive” about teens auditioning for The Sound of Music back to an adult madcap Sondheim tune “Getting Married Today” from Company … as you can see, this was indeed a varied mix – anything goes – type of evening, with something for everyone’s tastebuds. Coming in at 105 minutes, there were no lags, not a dull moment to be had.

And the talent? Enormous with a cast of 17 fabulous performers, including Ilene Graf and husband Ben Lanzarone, Juliana Hansen, Sammy Williams, Tony winner from A Chorus Line, Fay De Witt and Carol Weiss, Shelly Goldstein, who brought down the house in her ‘Vera Wang‘ wedding gown for the Sondheim number, David Zack, Greg MacKellan, Joanne O’Brien, Autumn Reeser, Alexis Carra, Amy Brothman, DiAnne Fraser, Oliviana Halus-Griep and Emma Ragen, young teenagers with amazing voices and of course Michael Lavine, who accompanied throughout and did a couple of songs along with his narration of a crazy anecdote or two.

Highlights were Ilene Graf’s Gershwin medley that included: “A Boat That’s Leavin’ Soon for New York”, “Summertime”, “It Ain’t Necessarily So” and “I Got Plenty of Nothing” from Porgy and Bess. Terrific set and Graf, accompanied by hubbie Lanzarone, sounds better than ever. Sammy Williams did a fun song about sporting a tux from Too Old for the Chorus. This is another triple threat from the70s on Broadway, like Graf, who should be performing onstage a lot more. Another Broadway gal from the 50s and 60s Fay De Witt did a terribly amusing “French with Tears” from Harold Rome‘s revue Alive and Kickingimpersonating a character a la Piaf, only less sad with some deliriously funny lyrics. Juliana Hansen did a great rendition of David Friedman‘s “My Simple Christmas Wish” where the performer lashes out for total and immediate empowerment. Always wonderful to hear this lady sing! David Zack did a fun “Bargaining” from Richard Rodgers‘ Do I Hear a Waltz? DiAnne Fraser and Amy Brothman dueted on a bangup rendition of “I Don’t Know His Name” from Sheldon Harnick‘s She Loves Me. Autumn Reeser‘s “He Takes Me Off His Income Tax” from the revue New Faces of ’52 showed a beautifully satirical parallel to 2017 and Milania Trump. In the finale spot Alexis Carra blew us away with her breathy, sexy “Mein Herr” from Cabaret. Bravo!

All we can hope is that producers Fraser and Brothman will do another of these shows, keeping it a regular feature in the San Fernando Valley. They are toying with the idea right now and polled the audience for a name. I came up with a catchy Moon Over Tujunga or Moon Over NoHo.

As to the food and service at Vitello’s, it’s one of the best and friendliest eateries in town!