On Tuesday April 12 I eagerly returned to Rockwell Table and Stage for the third time to see An Evening of Classic Broadway. The show comes to Rockwell for one evening every couple of months. Why do I keep coming back? Produced by Dianne Fraser and musically directed by extraordinarily talented Brad Ellis … and with a bevy of great singers on board, it’s guaranteed fun, extra high on entertainment, and it incorporates Broadway standards both classic and contemporary. If that isn’t enough, the structure is laid back and spontaneous, allowing one to sit back, relax and just savor the sounds.

Ellis, at the piano throughout, opened with a mashup – he was with Glee, remember! – of “All I Need Is the Girl” from Gypsy with “Style” from Robin and the Seven Hoods. In a mashup rather than a medley, phrases from one song collide with phrases of another, creating clever associations and uber laughs. Ellis really knows how to nab them and how to handle his guest artists. They all have such a good time onstage, it’s as if we were sitting in their living room. You can’t be better entertained than that!

Highlights of the evening were: a terrific duet of Fraser and Kirsche on Cole Porter’s “It’s De-Lovely”, which was sung first in Red, Hot and Blue; Rosenblum’s exuberant delivery on Newley’s “Look at That Face”; O’Brien’s fine rendition of “Johnny One Note” from Rodgers’ and Hart’s Babes in Arms; Polk’s fun, fun, fun “Honeysuckle Rose” from Waller’s Ain’t Misbehavin’; De Lano’s lovely interp of “I’m Not That Girl” from Stephen Schwartz’s Wicked; Hansen’s gorgeous “Vanilla Ice Cream” from She Loves Me; Damiano’s slick and spicy “The Miller’s Son” from A Little Night Music, and little Dante Damiano’s sweet and tender “Not While I’m Around” from Sweeney Todd. We musn’t forget Fraser’s delicious rendition of “Gorgeous” from The Apple Tree, Kirsche’s excellent Porter medley, and Ellis’s home run with “Nobody Else But Me” cut from the original Showboat.

The show usually ends with a singalong. This time around the song was relegated to the entire cast, nicknamed the Rockwell Chorale, on the rollicking “The Wells Fargo Wagon” from Meredith Willson’s The Music Man. It really put the crowd in a rousing spirit, and audience joined along in fine form. A wonderful time was had by one and all. Great show! The next Evening of Classic Broadway will be Monday, June 13. Make early reservations, as seats sell out fast!

Just a nod to the Rockwell kitchen staff for the fine food and superior service! It’s one of the best meals I’ve had, at least on the Hollywood side of the hill…and the waiters work diligently and efficiently to please. Try the delectable French onion soup and the scrumptious cheeseburger sliders! 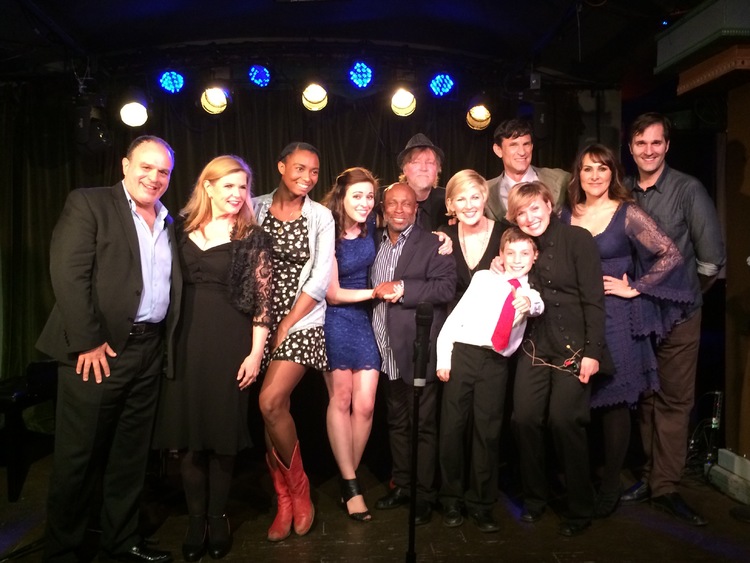